Crunch was still stuck inside the machine... "Dammit! I've gotta get outta here... Before Neo comes..." Crunch thought to himself, and he looked out the window, and he saw the remote on the floor... "There it is!!! No wonder I'm not under control at the moment!" Crunch said, he tried smashing the door as hard as he could, and he finally broke out of the secret weapon, and Crunch was relived! He got up of the floor, but then... "Hello there! You must be dat Bandicoot!" a floating mask named Rok-ko said, "Errrrm, I don't like furry critters..."Another mask named Py-ro said, Crunch stared at the fellow masks "Who are you guys? What do you's want...?" Crunch asked the floating mask's "You dun even know us? We're the Elementals! Uka sent us here, to help you defeat dat Crash bandicoot fella!" Rok-ko told Crunch "Ehh Crash, But I thought I was going to face him alone..." Crunch replied, "Well mister, Crash bandicoot must be pretty deadly if you ask me! Uka uka was serious about this! So this is NO DAMN JOKE!" Wa-wa told Crunch seriously, Crunch went silent... as well as the other elementals... "Hmm, maybe you’re right, so what are you masks supposed to do with me anyway?" Crunch asked the masks "Well my furry friend, I'm not too sure yet, Dr Cortex wanted us to give you some power or something? And yes.... Rok-ko, Take Crunch to your temple! And start training there!" Py-ro told Rok-ko "Uhh, I dunno how to Teleport though!" Rok-ko moaned "Errrr, but Neo TOLD me to tell you to take Crunch there, and teach him how to use you’re element, Morron!" Py-ro yelled at Rok-ko "Ok ok ok!!! Uhh Lo-lo, can you take me there?" Rok ko asked Lo lo "Heh!!! Ok rock-boy!" Lo-lo told Rok-ko, and Lo-lo made a portal… and bright blue light was shining out of it..."Well, are you coming or what?" Rok-ko asked Crunch "Hmm, Well To get outta here...yeah sure!" Crunch replied, and they both went into the portal. 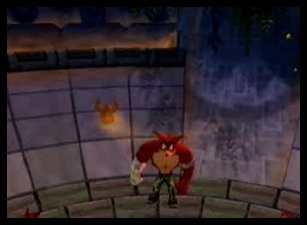 Crunch and Rok-ko arrived to the temple, and Crunch was amused! "Is this it! I'm back on earth! Wow..." Crunch said amusingly,

"Yeah yeah yeah, we're on Earth so what!" Rok ko told Crunch "So what? I haven’t been here in years you Twerp! That's why I find it...well... Amusing" Crunch asked Rok-ko "How dare you call meh a Twerp!" Rok-ko yelled at Crunch and there was a large earthquake! "Hay! I was only joking man! Sheesh! And anyway, what's you’re name?" Crunch asked Rok-ko "Hey, yo don't even know meh name! I'm Rok-ko! The Earth Elemental and I'm like, the Coolest Elemental!" Rok-ko told Crunch "Err ok, so what kind of powers can you do?" Crunch asked Rok-ko, "Duh! I do Earth-related attacks, but I haven't leant how to teach them to other creatures Yah know!" Rok-ko told Crunch "Well that pretty stupid, what's the point in training me if you can’t teach me? Hey… Why do I need your help anyway, I can take on Crash myself!" Crunch smirked "Hay! That's soo not funny man!" Rok-ko yelled at Crunch and there was a loud as sound, coming from the sky, and there was Neo in a small Spaceship, "Oh great… Neo knows I'm here..." Crunch growled "yeah, of course! Uka uka would have told him..." Rok-ko told Crunch, and Crunch looked up at Neo in a small spaceship "Well Crunch! You better prepare for you’re first battle with Crash Bandicoot!" Neo told Crunch "Just let me fight him, without controlling me!" Crunch shouted at Neo! "Hmm... Well, Only for this first battle... But if you lose, I'm handling the rest..." Neo laughed, and Crunch was furious "Well, ta ta for now... I'll be watching you on my camera, So don't try escaping!" Neo told Crunch, and Neo's spaceship flew back into space.

The battle against Crash

Crunch and Rok-ko were waiting for the arrival of Crash "Are you sure its ok if I go inside a ball, made of Rock, Cos I cant even see where I'm going..." Crunch asked Rok-ko "Yeah, of course cuz just use you’re freaking animal instincts! My elemental powers are da bomb too! They're much better than my brothers powers, heh!" Rok ko told Crunch "Well, I hope so..." Crunch told Rok ko and...In the middle of the temple, was a bright shinning light and out came an orange furred fella, inside a ball, that was see through..."Who's that? That cant be Crash, he looks too wimpy if you ask me... I was expecting the guy to be at least bigger than me…" Crunch asked Rok ko "Yeah, But he looks like he wants to fight us..." Rok ko told Crunch, and Crunch looked at the orange fella, and then another mask came out of the bright light, "Its Aku aku! Ekk! That's Crash all right! Aku aku is supposed to be helping Crash!" Rok ko yelled at Crunch "ok..." Crunch told Rok ko and Rok ko flew above Crunch and powered up and Crunch was inside a ball, made of Rock! It rolled down the Temple and it smacked into Crash ball, and Crash inside is ball rolled all the way to the other side of the temple "Ahh! I can’t see where I'm going Man! I think I just hit into the wall or something!" Crunch growled "Nah man! You just smacked into Crash! Good one!" Rok ko told Crunch "Yeah, big deal, I still cant see where I'm going!" Crunch told Rok ko and then... 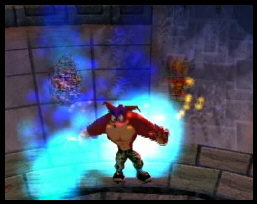 Aku aku flew up above Crunch and blasted Blue fiery rocks down at Crunch and the ball broke and Crunch got hit by the rocks "Ahh! What just happened? He used you’re element just then, on ME!" Crunch yelled at Rok ko "Ahh!!! That's it mate!!! GO AND CRUSH CRASH!!!!" Rok ko told Crunch, and Rok ko powered up, and Crunch was again inside the rock-ball thing "get him!!!!!" Rok ko told Crunch, and Crunch went towards the sound where Crash Was, and he just missed Crash "You missed him man!!!" Rok ko yelled at Crunch "Hay!!! I can’t even see where he is!!!" Crunch growled at Rok ko and once again, Aku aku blasted the blue fiery rocks down at Crunch!!! And Crunch was getting tried "Why does that Crazy mask keep doing that!?!" Crunch yelled at Rok ko "I'm, I'm not sure?" Rok ko told Crunch, and Rok ko gave Crunch the same rock ball thing and Crunch was furious! He didn't know what was going on! "This is you’re last chance Crunch, I dun have much power left" Rok ko told crunch "Ok, I'm just gonna have to get him" Crunch growled and He got into the Rock ball again, and rolled straight towards Crash's Ball and Crunch smashed into crash's ball "WHOA!" Crash yelped and Crash In his ball rolled and went up a ramp, and he was in the sky! And he came down to the ramp "Crash! Smack into the rocks!!! Get all 4, then we'll win!" Aku aku told Crash, and Crash dodged Crunch and quickly hit all 4 of the rocks! And Crunch still didn't know where he was! And Rok ko looked at Aku aku "Oh no....I know why Aku keeps on hitting us with them rocks..." Rok ko gulped "I don't get it..." Crunch told Rok ko and once again..........Aku aku performed the same attack and Rok ko's rock-ball broke, and Crunch was hit by the falling rocks...

Aku and Crash won the battle, and they went into the bright light, and vanished!

Crunch was tired, he just lied on the ground "...This has got to be the most STUPIDEST fight ever!!!! Now I'm over, Dr Cortex is going to control me, all thanks to you!" Crunch yelled at Rok ko "Hay!!! It’s not my fault! I'm only a learner at using these elements" Rok ko cried "Oh, well that explains a lot... now what's going to happen..." Crunch said then suddenly...Both Crunch and Rok ko got teleported back to Neo's spaceship..........