Tani and Derick were walking around the city, Tani held onto her notepad and a pen, writing down anything she could about her race, “So Derick, what are a thylacines best features? Like, abilities for example?” “OH UM…. well the female thylacines are known for their uhh natural beauty… and the males are known for their athletic bodies in case you haven’t noticed… and most are also very strong and like to stay fit!” Derick told her, hoping she would smile but Tani was left with a puzzled expression instead, “Are you sure about that? Doesn't around too correct if you ask me” Tani asked him “Oh yes of course I'm right! Its normal for thylacines, that’s what my father told me about them!” Derick looked at Tani and thought, “Man, she’s different from the other girls I've met… she doesn’t seem to be taking any interest… but she will after a while, after all she's a thylacine like me and our species is extremely rare! So she has to!”

Derick then spotted Crunch with Crash and Coco running down the street, Derick thought to himself again “Dammit! That guy is coming…” he looked at Tani, “Uh Tani, lets got this way...” “Nah, I've got to get back with my mates, I bet they’re wondering where the hell am I…hey! There’s Crunch!” Tani yelled, she ran over towards Crunch and the other bandicoots “hey Tani! There you are! So, did you beat up that creep already?” Coco asked her “What? What are you talking about…?” Tani wondered, then she looked at Crunch, Crunch looked away and Derick frowned slightly “Meh. It's not his fault, Most people think I’m a scum just by looking… But I’m not one on the inside!” “Yeah, Derick's right… don’t judge others before you know them ok? Because he taught me quite a bit today, I wrote down what I could into my notebook” said Tani, “Yeah… suit yourself” Crunch replied, he turned his back, Tani frowned and walked over to Crunch and whispered “Come on man, don’t be like this! He didn’t do anything, he's just trying to teach me some stuff! He's going to teach more tomorrow…” “Well, me Crash and Coco got the topaz tonight, so Brio can reverse the effect of the anthro effect on the human race” Crunch told her “No! You can't! Not yet anyway! I must know more about my race! This may be my last chance!” yelled Tani, “It’s the right thing though Tani, humans are meant to be humans, not animals. I just want everything to be normal again like old times!” Tani wasn’t too happy, Coco then grabbed out one of her devices which looked like a remote “Ok, I’m going to teleport Brio and his invention here, then we can save the world once again, as always!” she pressed a button and out of nowhere, a portal opened and Brio with his machine appeared near Coco “I-I-I-I-its about t-t-t-time! I’ve been waiting for a-a-a-ages!” Brio stuttered, 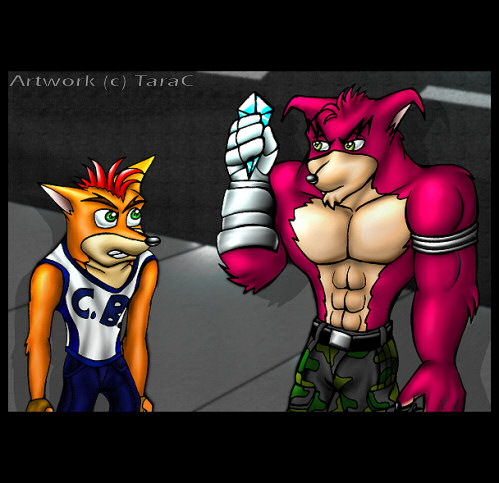 Crash handed the topaz to Crunch, Crunch looked at the topaz, then looked at Tani… Tani was very angry in the face, Crunch felt a strong guilt. He wasn't sure if it was right, he knew it was right but he knew it would make Tani upset, Crunch closed his eyes tightly and crushed the topaz with his metal arm, everyone stared in shock as the topaz pieces fell on the ground. Derick had no idea what was going on but didn't care anyway, Crunch watched the topaz crumble to the ground, he ran off as fast as he could.