Crunch and Tani walked around the city park, talking about random things "Hey, have you noticed around here that the air well... smells so unclean?" Tani asked Crunch "Yeah, I was gonna ask you that too but I thought I was wrong... remember when Cortex's PowerStation was still working and the air was not so fresh?" "Hmm yeah, pollution... Since the anthros around here are supposed to be humans... " Tani thought “I think we should get the topaz thing sooner don’t you think?” Crunch asked Tani, “Yeah… Now I’m starting to understand why you hate the idea of humans being anthros… should we just go and check out that Gym over there? We’ll make those steroid freaks look bad, just for laughs!” Tani said and laughed “Yeah sure! Sounds like fun” so both Tani and Crunch headed over to the Gym.

They walked inside… and saw dozens of anthros training “Look at that wimp, I could lift ten times more than that!” Crunch laughed, “So, look at that kick boxer, It reminds me of when I was a kid doing kick boxing… heh” Crunch walked over to a guy trying to lift some weights “Are you having troubles there?” Crunch asked him “Shut up Jackass! I bet you couldn’t lift it easily!” he growled, Crunch rolled his eyes and grabbed it with his normal hand “Did you just call me a Jackass? And said I couldn’t lift it? I don’t think you’re even worth a challenge…” Crunch told him, the guy felt like a weakling… “Come’ on Crunch, don’t pick on the humans!” said Tani, until she started smirking to herself along with Crunch, the anthros in the Gym started to get rather annoyed at them “You two are such smartasses! Who do you two think you are!? Just coming in here to shit-stir and nothing else!” one of the anthros yelled, the rest of the anthros started cursing at the two “Well, my name is Crunch… And this is Tani… So you guys really want to challenge us?” he asked the crowd “I’ll fight you, you… what ever you are! But we wont fight the chick!” “Excuse me! I am NOT weak because I’m a girl! I'll make you pay for saying that!” “And I’m a bandicoot, a burgundy bandicoot” the anthros started to get mad “GET THEM!” one of the crew cursed, they all came for both Crunch and Tani, Tani sprinted up to two guys and kicked them in the chest, Crunch stood there as five anthros came for him, Crunch grabbed one by the tail and spin him around and smacked the other four guys out of the way, they slammed into the other guys…both Crunch and Tani stood there in fighting stances, waiting for more “Holey shit! These two are powerful! They didn’t even use much of their strength against us!”

The anthros were worn out… and rather surprised with them. "Well don't provoke us next time... oh and don't do drugs! if you do already, that is" said Crunch, everyone then stared at a guy in particular that was unnaturally huge and muscular, he smiled nervously. Then someone came out of a room, which was upstairs, he yelled “Hey! What’s going on down here! This place is for exercising! Not fighting!” “Well, it's like I care. Come on Tani, lets go!” Crunch was about to walk away with Tani following behind, “What ever…. ohh now what’s such a lovely woman doing in here?” The guy said, he quickly came downstairs to look closely at Tani “Uhh no, I’m not on the look out for creeps thank you very much, so don't even bother!” Tani growled “AH Oh! I was just joking! I just wanted to ask you something, because you look different from other woman. My Name is Derick! And I’m a... thylacine” he told her, Tani was quite shocked and Crunch was too… “What! You can’t be…. Are you sure?” Tani asked Derick, “Of course I am, look at my stripes!” Derick said, he pulled his shirt off and showed them, and Tani believed him straight away “Wow, it looks like me and Tiny aren’t the only ones ehh Crunch?” Tani asked him “Well, I think he is one but he's not a true thylacine… just a human in disguise” Crunch said, as he glared back at Derick “What the hell are you talking about! I am a thylacine! Everyone else thinks so too” “Hmm, ok Derick…. Since I've been trying to find out more about my species… I would like it if you would teach me a thing or two about thylacines… because I don’t know much… I can just write them down on this notepad I have here” “Tani! What are you doing? He can’t know anything because he was a human!” “What’s wrong Crunch? He's a thylacine and he could answer some of the questions no one else can answer, are you envious or something?” Tani told Crunch, Crunch felt hurt because he knew he was slightly jealous but right at the same time, Derick stood there smiling “Heh don’t worry Tani, I shall teach you everything I know! But it's best if I teach you ‘alone’ because I don’t want ‘other’ species to know the secrets of ‘our’ race. Just follow me outside this way, and I shall teach you a thing or two…” Derick told Tani, "Isn't this great Crunch? Now I can finally find out something about my species... I wont be long ok?" "But Tani...." Crunch muttered, then Tani walked out the backdoor... Derick waited for her to leave out of scene, he then walked up to Crunch 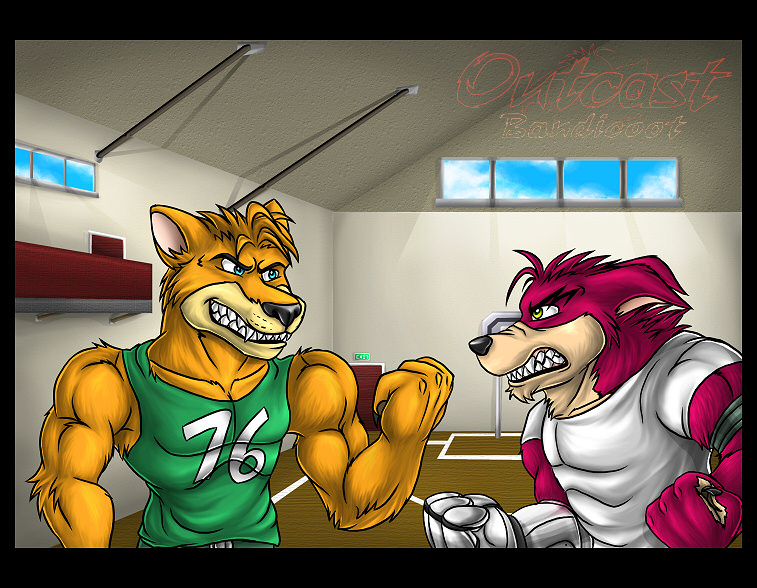 “Hah, who do you think you are? You're not even a thylacine! I suggest you get out of her way, she can learn much more from me than you!” Crunch viciously growled and eyed Derick face to face “How dare you say that! You don’t even know me and Tani, I’ll seriously beat the living daylights out of you if you try anything dirty!” “Hmm, I wonder what Tani would think if you done that… it’ll be a shame…then she'll never know anything about her own kind” Derick snickered “Tani will soon realize you're just a low life scum, she’s not like other females… So don’t treat her like easy prey! You’ll be very sorry…” Crunch told Derick, Derick smiled devilishly and walked out the back door…. Crunch was worried, he wasn’t sure what to do.