It was moments after the powerful gust of energy past over them... everyone got up "Wow! Ok, now what the HELL just happened here?" Pinstripe yelled, "Don’t ask me!" shouted Kong, "Man, do you potoroos really need to swear that much?” complained Crunch, as he got up. “Uhh yeah I suppose, cause we’re gangsters!” Siegdog told him, Crunch didn’t take much notice, he looked at Cortex’s Castle Island in the horizon “It looks like the gust came from there…” "Cortex’s Castle? I thought that fag was dead!" Pinstripe asked, "What’s a fag?" Tommy asked Tiffany "It’s erm... a very MEAN and EVIL Doctor!" Tiffany told Tommy nervously, Tommy scratched his head in confusion and Tiffany glared over at Pinstripe angrily. Pinstripe smiled nervously, "Didn’t you know Brio still lived there?" Blaze asked Pinstripe, "Oh yeah! That midget Frankenstein! So... he caused the explosion?" he asked Crunch, "Well, it seems like he has! Well, I'll go and check it out, while I'm gone, can you guys go back home and make sure Ripper roo doesn't get inside? He's a real trouble maker at times... and Tani would kill me if anything is broken!" he said, and smiled slightly, "Yeah sure cuz!" Pinstripe said, everyone went back to the tree house. Crunch ran down to the beach and drove off on his jet ski towards Cortex’s Castle across the ocean.

Crunch arrived at the castle, and looked around for N.Brio... "Hey Dr Brio? Where are you?" Crunch looked around the castle. He carried on searching the place, climbing up ladders and stairs… he tried to catch Brio’s scent but just couldn’t, the place was still dusty from the ‘explosion’. And the castle has changed a lot since he last visited. Crunch arrived near the top of the castle and carried on lurking around the castles hallways and laboratories, "Man, this place is a mess! Come’ on Brio, where are you?" and as he shouted, he heard something behind a fallen over shelf, Crunch crept over towards the shelf, he listed it up and placed it back up straight, a creature from behind the shelf looked at Crunch and screeched in fear, 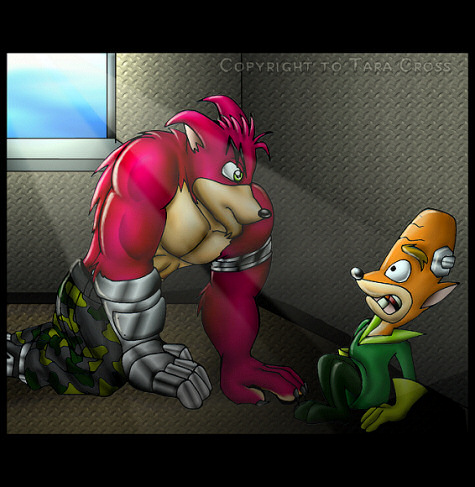 "AHHHHH WHO ARE YOU!!!" it screamed, Crunch looked at it strangely "Wow man, calm down! Who are you? Do you know where I can find Dr Nitrus Brio?" he asked, "P-P-Please don’t eat me! I b-b-b-beg you! I was just testing something, I didn't mean to disturb!" The creature stuttered in fear, Crunch continued to glare more closely and noticed the creature had some very similar features to Dr N.Brio himself. "Wow Dr Brio? Is that really you? Come’ on! It’s me Crunch! Don’t you recognize me?" Crunch asked the creature... that was Dr N. Brio, he looked up at Crunch "C-C-C-Crunch? I-I-It really is you! You’re all grown up, so strong looking too!" Brio stuttered with joy "Sigh, good thing you still remember me. So... can you explain what on Earth you have done to yourself?" Crunch asked Brio "I-I-I just c-c-c-c-CANT get over the fact that you’re b-b-b-back!!! Has Tani s-s-s-s-seen you?" he asked Crunch "Yeah, she has... it was great to see her again. We currently live together but she’s gone for a while... well ok can you at least TELL me why the hell you're orange and furry... Oh no, don’t tell me... you’re a bandicoot right?" "Yes I am!!! My newest machine really did work! I-I-I have been b-b-blessed by science!" Brio said and looked up at the ceiling like a retard, "Right. But why would you want to become a bandicoot?" Crunch asked, "Because... I feel lonely!" Crunch had a blank stare, "That has to be the most stupidest thing you have ever done! You made yourself a bandicoot just to try and be friends with other Bandicoots? That’s pathetic!" yelled Crunch, Brio just sighed "Oww c-c-c-come on Crunch! I thought you'd be g-g-g-glad!" Crunch carried on looking at Brio blankly...

"Ok... Well, can you explain why there was a huge gust of wind or whatever it was that came from your Castle?" Crunch asked, "T-T-T-There was?! Oh No! Oh no no no!!!" Brio gasped in fear, Crunch was rather confused by his reaction, "What… Why no?" "D-D-D-Don’t you realize what this means? It means that if any human touches that energy from t-t-t-the blast, will.... t-t-t-t-turn into an evolved animal!" he said and gasped while dramatic music played in the background, "What? That’s crazy! I don’t believe it, how could 'wind' change a human into an evolved animal?" Crunch asked "Its s-s-s-simple, I used these special types of power diamonds called 'futurium topazes' to build to machine, the topazes are no normal gemstones t-t-t-that are usually sold in shops, these d-d-d-diamonds are believed to come from the future, the future in w-w-w-which I believe Evolved animals will exist naturally... I used these diamonds to help make the possibilities of changing humans i-i-i-into evolved animals! And it has w-w-w-worked! Worked on myself!!! I'm s-s-s-so proud!" Brio said with glee again, and Crunch was still unimpressed, "That’s truly insane... well, I better get going now then, all the madness about humans turning into animals is making me feel sick” he then walked out of the room, Brio stood up “No wait Crunch! This is serious, some of the humans could be evolved animals!” Brio screamed, Crunch tried to ignore him “Oh come on Brio, I’m sure that gust didn’t go that far, there’s not a single human 2000km near us! Oh wait a second… Papu papu’s village…” Crunch said, as he stood still. “I t-t-t-think you should see his village, see if I am right. Oh oh c-c-c-c-can I come p-p-p-please?! I’d like to see it…” Brio asked Crunch “yeah what ever…come on then, lets go” Crunch said. Both of them then left the castle, and headed towards N.Sanity island to enter Papu papu’s village.