Crunch and Tani were waiting for a phone call from Pinstripe, "Man Tani, check out that storm outside... it looks bad..." Crunch told Tani "Yeah... that's like no storm I've ever seen, I think Jaseo's done something!" Tani said, both Crunch and Tani watched the storm get worse and worse... Tani's door opened without warning Tawna came running in "Crunch Tani!" Tawna cried, she was extremely upset "Tawna! What are you doing here, I thought you were with the bad guy..." Crunch asked Tawna "No no! I hate him! He said hes gonna kill you and he almost killed me myself! I don't want to be on his side, I just wanna be here with you two!" Tawna cried, Tani and Crunch were worried "How did you get here?" Tani asked Tawna "I stole the car from Jaseo!" Tawna said "That's great! Now I can go and find Jaseo!" Crunch said "No! Don't go! He'll destroy you! Hes stealing power from the PowerStation! And who knows how powerful he is!" Tawna warned Crunch "Yeah Crunch... I don't like the sound of that..." Tani told Crunch "But I have to go, I'm the only one that can stop him! Just... believe in me Tawna, and Tani..." Crunch told both Tani and Tawna "Ok Crunch, Tawna will show the way... I'll drive" Tani said "What about Tiny?" Crunch asked Tani "He'll be fine, hes asleep at the moment..." Tani said, So then Tani, Crunch and Tawna went outside, got in the Car and took off.

They finally arrived in southern Australia, they noticed massive thunder storms about a mile away "Man, just check out the storm over there..." Tani said "Please take care Brother..." Tawna told Crunch "Don't worry about me you two... I'll figure out something" Crunch told Tani and Tawna, Crunch took off into the fortress... "I'm, I'm worried about him... he's too brave…" Tani said "Yeah... Just like Crash..." Tawna said "Like who?" Tani asked "Oh, umm nobody... I was just mumbling..." Tawna said.

Crunch was running through the fortress, then he stopped "What if this is all a waste of time... I don't even know if I really stand a chance against this guy..." Crunch said to himself "You will stand a chance" a voice said from behind Crunch, Crunch turned around "Aku aku? What are you doing here?" Crunch asked Aku aku, "I just came, to try and help you out... this new enemy has power unlike any other enemy I've seen" Aku told Crunch "Yeah, true!" Crunch said "I want to give you some of my energy, to help beat this enemy..." Aku told Crunch "Really? That would be great, then I should be able to beat him without worries!" Crunch said "Yes, now here... just stand still as I give you some of my power" Aku said, Crunch stood there as Aku granted Crunch with some power, 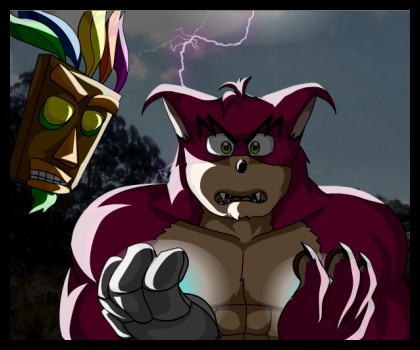 Crunch then noticed his hands had a glowing power around them "I am done, please use this power wisely... That's all I can offer for now..." Aku told Crunch, Aku aku then diapered "Wait Aku!" Crunch yelled, But Aku aku had already left, Crunch then felt he had the power to go and stop Jaseo... So he ran as quickly as he could though the fortress.

Crunch arrived where Jaseo was, "Jaseo! I'm ready to fight against you, I have power too!" Crunch shouted out to Jaseo, Jaseo turned and looked at Crunch "Heh, You've landed straight into my trap! I'm going to destroy you! I'm going to show you how powerful I really am!" Jaseo yelled at Crunch, Crunch snarled "Why don't you try so then! Come on! bring it on!" Crunch yelled, Jaseo then suddenly blasted a huge electric wave at Crunch, Crunch blocked it with his fists and then Crunch raised his fists and he then created large energy lasers that shot directly at Jaseo, Jaseo was blinded by the light and Crunch came dashing right through the light and bashed Jaseo in the chest, Jaseo felt extreme pain... he then got up and jumped high and blasted more electricity down at Crunch, Crunch simply got hit, Crunch felt the electricity... it was indeed far more powerful than before… it made Crunch feel a bit weak… "Hah! You see, my power has increased hasn't it?" Jaseo laughed, Crunch didn't say anything, he just tried to blast even more energy at Jaseo, Jaseo was quick "You can’t get me! I'm far to quick for you! Hah!" Jaseo laughed once again, Crunch growled "You won’t win Jaseo!" Crunch shouted, Jaseo just laughed to himself Crunch then lashed straight at Jaseo, Crunch kicked him in the chest, Jaseo got hurt once again, he fell to the ground... Then he got up "ARhhhHHhhh! I've had enough of this!!!" Jaseo yelled, Crunch then quickly turned, he watched as Jaseo powered up even more and then all of a sudden, Jaseo let out a huge electricity blast... Crunch didn't have enough time to dodge it, Crunch tried blocking it with his power but it wasn't enough! Jaseo's power pushed Crunch fast and he was close to getting pushed off a cliff "No! Watch out!" Tani yelled, she tried to help Crunch block the power, it was almost enough but both Crunch and Tani feel down the cliff!