Crunch had finally arrived at the shores of N.Sanity island, and he looked out at the sea and smiled happily, "Man! This could be it... I can finally see Tani after so long..." Crunch thought and he walked up to the water, he placed his paw into the water, he hadn't swum in sea water in such a long time, he simply just ran into the water, and just started swimming naturally, as his fur became soaked and his trousers became quite heavy, but he didn't care. He swum on and on.

Crunch was still swimming, he soon then felt the sand on his paws again as he approached the seashore "Not far now..." Crunch thought as he wadded through the water and approached the dry sand, he looked at X.Treme island and has a nice big smile written on his face, it reminded him of the days when he used to hang out with Tani and Kong, the large tree growing on the mountain was still the same, perhaps a bit bigger, and the small volcano wasn't as active as before, Crunch had finally started to feel a bit of light inside of him, he just wondered around the island calling for Kong and Tani... "Kong! Tani!" he called, there was no answer, so he ran deep into the jungles "Man, I don't think I can remember where Kong's house was!" Crunch said to himself, he tried to pick up familiar essences with his strong sense of smell, he he walked through the thick jungle, Crunch just carried on walking through the jungles, and then he stopped, and glared at a house, that had vines and plants grown all over it "That has to be Kong's house!" Crunch said and he ran up to the house, and looked around curiously, he saw the door "This is it..." Crunch thought to himself, and he opened the door nervously, he glared inside the house, the house was very messy, but with plants growing through the windows this time, it seemed rather empty "Hmm, no one home... I better have a better look though...." Crunch thought, so Crunch creped through the house, checking all room with curiosity, he then heard something, and Crunch turned around, and he was surprised! Koala Kong was seen there, sleeping on a lazy boy chair, snoring as he slept "Oh man! Its... KONG!" Crunch gasped, as Kong was snoring loudly, he was obviously fast asleep, Crunch then approached Kong and grasped onto his shirt and tried to wake him from his sleep... "KONG! WAKE UP! I'M BACK!" Crunch repeated, as he was trying to wake Kong up... 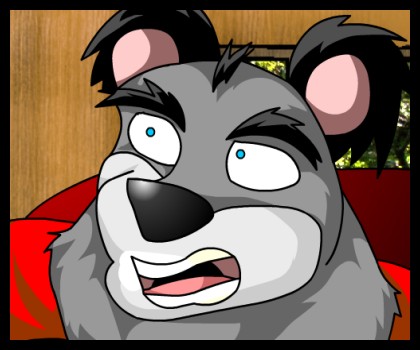 Kong slowly opened his eyes... "Uhh, not now I'm tried... yawn" Kong murmured, "KONG! Stop being silly! IM BACK!" Crunch yelled at Kong, Kong then finally woke up, he rubbed his eyes a few times, he got up off the chair and stared at Crunch is complete horror! "HOLY CRAP!!! GET OUT OF MY HOUSE YOU INTRUDER!!!" Kong roared like mad and Crunch was surprised "Hay hay Take it easy!" Crunch told Kong, But Kong was going mad,  Kong then grabbed a tea table, and threw it at Crunch, and Crunch smashed it with ease however! "Kong man! Stop being an idiot! Its me Crunch!" Crunch shouted at Kong, and Kong stood there "No you’re not! Cortex took Crunch into space years ago you fool!" Kong yelled at Crunch "Listen to me Kong! I finally escaped! Dr Cortex is gone now! And I'm back!" Crunch yelled at Kong, "You're-Not-CRUNCH! GET OUTTA MY HOUSE!" Kong yelled and Kong ran up to Crunch, and Tried to punch him, But Crunch couldn't take it anymore! He then punched Kong in the chest, and smashed Kong in the chest with his fist again, and Kong smashed into the wall, and he was almost knocked out "uhh...you win.....Take over me land..." Kong told Crunch as he laid there, and Crunch came up to Kong "Oh man come on Kong! Stop this! It me Crunch!" Crunch told Kong, and Kong took a better look at Crunch, and Kong was amazed! "Ehh Crunch!? But he... he's gone! You cant be Crunch? Wait a minute... It IS you! I remember the floppy ears, and the fur colour! But... ITS YOU!" Kong quickly got up "Finally you remember me! Sheesh! Oh and sorry for punching you, It was the only way to make you shut up" Crunch told Kong "Ahh its ok, Man! Just look at you, your almost as big as me! Wait until Tani sees you, She misses you man..." Kong told Crunch "Tani... She misses me? I thought she... might had forgotten about me...by now" Crunch told Kong "Nah man! She's been waiting ages for you! She's even built her own home, Out in the jungles..." Kong told Crunch "Really, that’s awesome! And anyway, Where is she?" Crunch asked Kong "Oh, she's gone to see her brother, But she'll be back tomorrow!" Kong told Crunch "Tomorrow... And She has a brother! Man I never knew that! So much has happened since I've left!" Crunch said to Kong "Yeah, Brio just found out last week, So Tani went to go and see him, I haven't seen him yet... But his name is Tiny" Kong told Crunch "Tiny? I haven't heard of him, Can you ring up Tani to come today!" Crunch asked Kong "Well, I can but I think you should chill out for a while, You look kinda worn out..." Kong said, "Yeah, lots of things have been happening today, man I'm so lucky to escape Dr Cortex..." Crunch told Kong "Yeah... and anyway, what happened to you’re arm?" Kong asked Crunch "Well, you wouldn't want to know... really..." Crunch said "Oh, ok... You dun have to tell me then...yeh" Kong told Crunch.

The sun was almost down, and the sky was getting dark, "Hey Crunch, want some of these leaves I found outside" Kong asked Crunch "No way! You should remember I don't eat plants! Is you’re memory loss STILL that bad?" Crunch laughed and Kong starred blankly, then laughed too "Oh yeah, me forgot about that!" Kong told Crunch, and Kong was watching the rugby "Too bad they always have Humans on TV, It not that cool to watch yah know..." Kong told Crunch "Hmm, I suppose so, But I'm not that interested in TV's anyway..." Crunch said, "You’re not!" Kong asked Crunch "Yeah... TV's is all Dr Cortex gave us for amusement... I got bored of them after a few weeks, but the Gasmoxian Channel was quite amusing!" Crunch told Kong "Oh... crappy..." Kong said "Well, I'd better go to sleep early..." Crunch said "Ehh sleep early... But why? Ahh, I understand..." Kong told Crunch "what?" Crunch said "Its ok to be desperate to see her, She's quiet a nice looking Tasmanian tiger…" Kong said as he laughed, and Crunch was furious "HAY! I'm not that desperate! I just haven't seen her in ages!" Crunch yelled at Kong "Oh yeah, true...I suppose... Oh and there's one more thing I should tell you... don't let her beauty fool you, she's rough on the inside and outside if you look closely...." Kong said, "Yeah whatever..." Crunch said, and Crunch lied down by the fireplace, and feel asleep.